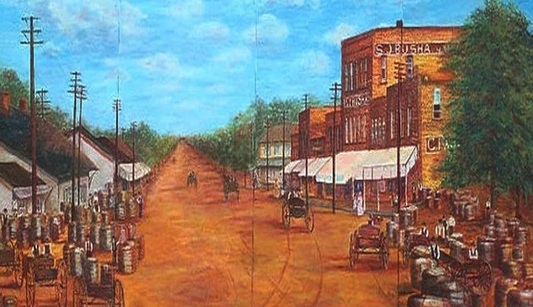 I remember when there wasn't a single red light in BTown and when one went up. I remember when the Harness Shop and Tannery were going full throttle. I remember when the Allens still lived in the big house, and their children attended the schools on Hill St,   I remember when everybody bought their clothes Downtown at Ramey’s, Polly’s, Tom’s, Buice’s, and Drake's, their hardware at Economy Auto,  their groceries at Burel's and Hill Brothers', and if you needed milk and bread midweek or a Big Daddy anytime you ran over to Martin's, Beard's Phillip's, Shoemake’s, Mauldin’s, Waycaster’s, or the Clover Farm. And you could launder your clothes at Busy Bee. I remember when David House had a dry cleaner on Five Points, and Cecil walked the street with an easel on his back. When men gathered to chew the fat at Jay‘s Drug Store, and Garner's was just across the street. When Simpson’s had a lunch counter and Anglin’s sold ice cream by the scoop in back.
Post a Comment
Read more

The New York of Gwinnett 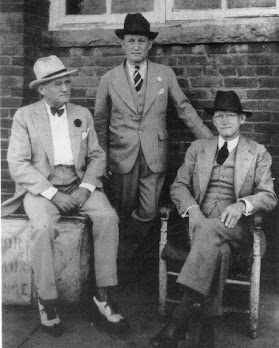 Brothers Allen  Bona Jr.,  Victor,  John Q.   "﻿Everything goes back," Patricia Roebuck Nash says, "to the Allen family philosophy of striving to be the best you can be regardless  of whether you lived in a mansion on Main Street or a company house on Leather Street." Indeed, the Bona Allen family loved Buford and took a vital interest in every aspect of it.  Mr. Bona was wealthy, but he was no  Ebenezer Scrooge.  He took care of his employees, even keeping his businesses in operation during the Great Depression. The Allen's generosity abounded in education, and no less so in athletics.  It was Mr. John Q. Allen who drafted the company’s semi-pro Bona Allen Shoemakers baseball team, in 1933, and his family went so far as building houses on Hill street for them to live in. The team was an immediate success, winning 56 of its 61 games. I was never a basketball player, baseball player, football player, cheerleader,  or even a water boy. Formal athletics
Post a Comment
Read more 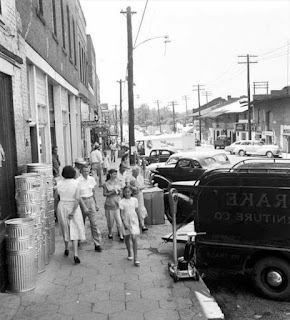 Doing the BTown Waltz I usually  found myself in church on Sunday mornings.  I recall attending a Church of Christ in Lawrenceville with my parents and the Junior  Williams family .  And then when I was older mama let me run  up to the First Methodist Church of Buford on the corner of Hill and Main Sts.  I must have been about eight years old.  Kids would gather in a large room; Chris Garrett's mother, I think, was our teacher.  One Easter she hosted an egg hunt. I distinctly remember Clydesdale horses grazing near the edge of her front yard, but her other son, Craig, says he has no memory of such horses.  One spring we had a feeding on the church's side lawn, in lieu of loaves and fishes and wine, we ate fruit and drank Fanta grape and orange soda.   I usually didn't stay for the preaching hour. I'd run out, trying to make it home before the beginning of the noonish movie, especially National Velvet. It was Susan Dollar who, in c1965, introduced me to the
Post a Comment
Read more

Sacred Halls of the Wolf Pack

Buford Grammar School on Hill St . The dogs were long dead, and Miss Geraldine Holbrook's school yeast rolls were but a treasured recipe on this day. I stood atop the steep bank running parallel to Peevy Street,  staring down at the dark windows of Mrs. Greer’s fifth grade.  I can almost see the child I once was staring back at the adult I am now. Hill Street was once the hub of education and extracurricular activities—sports, debates, plays, carnivals, Miss Buford,  sock hops, concerts. But no more. Once emblems of progress, they have been replaced by progress.  The old grammar and high schools are now empty lots. The new high school, which became a middle school, has been replaced by the   Buford  Community Center. Only the gym remains, a squat memorial of what once was glory but never will be again. And then time wheels back and I am sitting at my desk in that fifth-grade class. Lunch is over, and the school rolls are still yeasty-flavorful in my mouth. Mrs. Greer, tall
Post a Comment
Read more
More posts